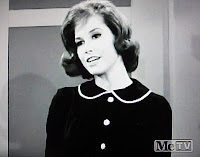 I was pleased to read an article on Slate recently stating that "Peter Pan collars" are currently back in vogue. Although I was never a boy and grew up ages ago, I still think they're the cat's pajamas. And I had a sort of funny little coincidence while thinking about that the other night. I was escaping into après-dinner TV nostalgia and reflecting on how I really like Mary Tyler Moore in black and white, but prefer Marlo Thomas in color, because her outfits on That Girl (Miss Thomas' Fashions by Cardinali) were so Sixties-style awesome and had such a saturated color palette. (Although, in fact, when the show originally aired, 1966–1971, I had to watch it in b&w, so maybe I'm simply enjoying it in color for the first time.) Just as this fairly frivolous thought was flitting through my head, a promo for MeTV popped up in which Thomas's character, Ann Marie, says: "Watch me in color or in black and white, but just watch me!" And then an episode of The Dick Van Dyke Show came on and here comes Laura Petrie in the most fetching at-home ensemble consisting of black pants and top with large white buttons down the front and a cunning Peter Pan collar with white piping. (She must have been rather partial to the PPC as well, since she appeared sporting a similar look the following evening too.) There were 18 cases of Fashon* (for fashion) in OhioLINK today, and 103 in WorldCat.

(Mary Tyler Moore in "How to Spank a Star," The Dick Van Dyke Show.)