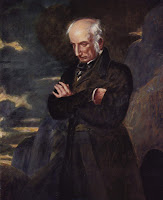 Wordsworth is a word worth spelling well. In an article last week in the New York Daily News concerning the relative literacy of New Yorkers, based on an annual survey of U.S. cities (New York City placed a surprising 22nd, in a "statistical dead heat with Lexington, Kentucky"), the word literate was initially, and ironically, misspelled as "literatre." (This seems just as likely to be a typo for literature, but here the author clearly meant literate.) In defense of the typo, he wrote: "The reason that I made that mistake was because, while writing up my post, I was also reciting Wordworth's [sic] 'Tintern Abbey' and translating Proust into Sanskrit." Which he was then forced to follow up with: "Damn, and I misspelled Wordsworth. This is getting very bad. The truth is, I was watching YouTube videos of dachshund puppies, okay? Cleveland, you won fair and square." (I like his last-ditch choice of the word dachshund there as that's a notoriously hard word to spell.) Since I'm all about coincidence lately, let point out that yesterday's nonsense poem by Lewis Carroll was said by one reader to be "a remix of poems by Tennyson and Wordsworth," although it's apparently a direct parody of "Alice Gray" by William Mee.) There were 28 occurrences of this typo today in OhioLINK, and 402 in WorldCat. Some of these, however, were proper proper names or intentional "words" like wordworthy. You might do better, depending on the size of your catalog and the number of hits you receive, to do a combined search on Wordworth* + Wordsworth*, which returns a more manageable 18 results in OhioLINK and 218 in WorldCat.

(Wordsworth on Helvellyn, by Benjamin Robert Haydon, 1842, from Wikimedia Commons.)