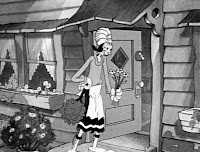 In the uncannily cast Robert Altman vehicle Popeye, the most marvelous match-up of all is the amazing Shelley Duvall as Olive Oyl, a role that the director felt she had been born to play, and a resemblance for which Shelley had often been teased as a child. It isn't just her impossibly belle laide looks—her lanky, leggy, wiggly, giggly, geeky sensuality. It's also her squeaky speech patterns, her cascading cadences, and her overall sensibilities. When she warbles comparatively about her putative boyfriend Bluto ("He's Large") and his seafaring, spinach-squeezing rival, Popeye ("He Needs Me"), she poignantly limns not a few other landladies' romantic dilemmas. Popeye was highly underrated by moviegoers and critics alike, in my humble opinion (and happily enough, in Roger Ebert's as well). If you missed this quirky sleeper when it first came out in 1980, it's well worth renting and watching for Shelley Duvall alone. In honor of Duvall's flawless turn as Olive Oyl, let's be sure and correct any misspelt Shelly/Shelleys that may show up in our catalogs today, shall we? We found 143 contenders for this typo in OhioLINK and 1,243 in WorldCat.