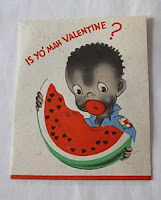 February is Black History Month and its midpoint, Feb. 14th, is Valentine's Day. Although the particular valentine pictured to the right incorporates numerous stereotypes about African Americans (watermelons, non-standard patois, ragged clothing, and over-large lips), an argument could be made (just like with the "N word") that, when it comes to matters such as these, offensiveness is in the eye of the beholder. "Pickaninnies" like this one were commonly seen throughout 20th-century American art and culture; nowadays such iconic images are considered racist almost by definition. Spike Lee raises the otherwise taboo topic of blackface and minstrelsy in the 2000 film Bamboozled, an arguably misunderstood and unfairly maligned effort on the part of an otherwise greatly admired director. I know a (white) person who walked out in protest during the first few minutes of this movie and Roger Ebert himself gave it a thoughtfully bad review. There were 12 examples of Valetin* (for valentin*) in OhioLINK today, and 364 in WorldCat.