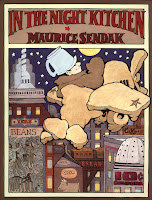 Once again, Gawker is totally on top of the day's Big Apple-oriented typo news. A trendy (i.e., "brand new and still retro") Manhattan disco called XL had decided to hand out "membership" cards to potential customers. But in true too cool for school fashion, they misspelled the word night in the URL crawling discreetly up the side of the card. Back to the drawing board with this one, boys! (Gawker in fact suggests a bit of karmic retribution in that the disco's designer/promoter once instituted a color-coded card system ranking patrons according to physical attractiveness, and speculates that "maybe the uglies with the white XL card aren't pretty enough to visit the real website and they're just throwing them off the scent.") And while we're dishing the dirt here, let me just add that I saw an interview with Maurice Sendak the other day in which he brazenly and somewhat bizarrely took exception to a bunch of people including Salman Rushdie and Gwyneth Paltrow, but perhaps most notably his fellow kidlit icon Roald Dahl, of whom Sendak said it was "nice" that he was dead. (An interview well worth reading, I might add if this weren't already plainly apparent.) There were five cases of Nigth* (for night) in OhioLINK this morning, and 418 in WorldCat.

(Cover of the award-winning and controversial In the Night Kitchen by Maurice Sendak.)

Not sure how to submit typos for future entries, but I just came across 494 hits for "varities" in WorldCat.