Maude + Maud (for Maud or Maude) 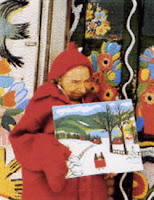 Maud Lewis (1903–1970) was a Canadian "folk artist" whose homely reputation continues to grow despite her death over forty years ago. Born and raised in meager circumstances and stricken with a childhood disease that was apparently either polio or rheumatoid arthritis, Lewis simply ignored what in a lesser person would have been both crushing poverty and a crippling disability, in her cheerful quest to paint every single surface of her tiny house, including "pulp boards (beaverboards), cookie sheets, and Masonite." Her husband, Everett, a "taciturn fish peddler," encouraged his wife's budding talent and bought her her first set of paints. She began by creating Christmas cards, which the enterprising couple would take door to door along with the day's catch. As word gradually spread, the two started selling Maud's paintings for a few dollars each out of their home in Marshalltown, Nova Scotia. Maud Lewis pieces currently fetch close to twenty thousand dollars. Not to be "maudlin" about it, but it's a very touching and heartwarming story. There were 48 examples of this typo in OhioLINK today, most of which were of the expected sort. However, the first hit was for a title by someone called, oddly enough, Maud Maude (actually, "Mrs. Maud Maude"), the author in 1890 of A Handbook of Pyrography, which apparently addresses yet another form of "folk art." We got 465 hits on this typo in WorldCat, some of which may also occur on records containing both forenames correctly spelled (i.e., for two different people).