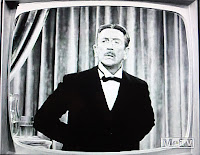 Dan Savage has dubbed Newt Gingrich the reluctant, right-wing poster boy for polyamory (or "honest nonmonogamy"), based on allegations made by his second ex-wife. In a similar vein, I'd like to nominate the poem "She's All My Fancy Painted Him" by Lewis Carroll its absurdist anthem. ("Don't let him know she liked them best / For this must ever be / A secret, kept from all the rest / Between yourself and me.") A friend and total Lewis lover commended this poem to me the other day and I quickly fell head over heels. It has a nice bouncy rhythm and pleasing rhyme, although it's not an easy one to memorize, with its almost promiscuous plethora of personal pronouns. Nevertheless, I shall persevere. (One website goes out of its way to assure a questioner that "yes, this is a nonsense poem ... so there are no typos here.") Coincidentally, as I sat up reading it later that night, I managed to catch another classic Dick Van Dyke Show episode (and yet another Peter Pan collar!) called "The Return of Edwin Carp." The retired and retiring radio performer is coaxed back onstage, this time on television and without his customary glass of elderberry wine to calm his nerves. (Edwin's elderly mother calls him a "naughty wino" and he's resolved to quit drinking.) Richard Haydn, who played the voice of the Caterpillar in the 1951 Disney movie Alice in Wonderland, is masterful here and his poetry is sublimely facetious. In "Perseverance" (his tongue-in-cheek spoof of "It Couldn't Be Done" by Edgar Guest), he burbles: "So he buckled right in, with the trace of a grin on his face—if he worried he hid it—and he tackled that thing that couldn't be done ... and he couldn't do it!" I believe that Lewis Carroll would have been proud of Edwin Carp. Make me absurdly proud of you by tackling today's typo, which turned up 31 times in OhioLINK and 277 times in WorldCat.

(Richard Haydn in "The Return of Edwin Carp," The Dick Van Dyke Show.)