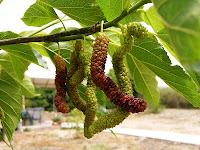 Mulberries are delicious, and extremely nutritious. They're also rather difficult to collect, except for on the bottoms of your shoes, the tops of your cars, the tires of your bikes, the poop of your birds, etc. They say the best way to harvest them is to lay a clean sheet or tarp on the ground and then shake the tree until they all come tumbling down. Unfortunately, however, mulberries don't all ripen at once, so basically that's a whole lotta shakin' goin' on. Expect a claret-red stain on everything they touch (including you). Some mulberries are white, but the commoner purple ones start out that way as well. You should also be prepared to to consume the little white stems, since unlike raspberries and the like, these fruits are not easily separated from their host. But don't look aghast: mulberries are really quite delightful, and the pride of places such as Turkey and Afghanistan. The latter country, in fact, was once known as the "Mulberry Empire." We shook five of today's typos out of OhioLINK, and 162 out of WorldCat.