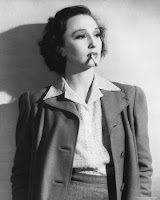 The word Google, surprisingly enough, is not included in my email app's dictionary. As is the spell checker's quirky wont, however, it suggests that I might want to substitute one of the following words for it: goggle, googly, gaggle, giggle, or guggle (which apparently means to gurgle). Well, how's about Googie too, guys, while we're at it? Georgette Lizette "Googie" Withers was a stylish actress (not a style of architecture) who was born in Karachi, British India, in 1912, and went on to become a fixture in English theater, film, and television. Her nickname, which means "Little Pigeon," was given to her by her nanny. She began acting at age twelve and landed her first big movie part in 1935 in The Girl in the Crowd, in which she had been playing an extra, when one of the lead actresses was fired and she was asked to step into the role. She also appeared in Alfred Hitchcock's The Lady Vanishes in 1938 and met her co-star and husband-to-be, the Australian actor John McCallum, while making The Loves of Joanna Godden in 1947. She later played the prison warden on the British television program Within These Walls (1974-75). Withers, who had once been dubbed "the best bad girl in British films," apparently didn't wither all that much, as she lived to the ripe old age of 94, appearing with Vanessa Redgrave in Oscar Wilde's Lady Windemere's Fan when she was 85. She died at her home in Sydney, Australia, in 2011, with more than sixty films and TV shows to her credit. There were 21 examples of Subsitu* in OhioLINK this morning, and 511 in WorldCat.