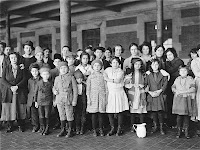 I blogged yesterday about a misspelled pizza shop sign, but when I saw it again a few days later, the first A had been duly erased, leaving an empty space where that letter had originally appeared, so that it now reads SPE_CIAL. The sign also now had the added "words" CHEES and IC TEE. At this point, I realized that the proprietors were probably not your typical lousy English spellers, but more likely recent immigrants who were still learning the language, a situation that makes such typos far more forgivable. I haven't tried the fish yet, but their garlic knots are delicious, regardless of whether they're properly spelled or "knot." We found four instances of Immgrant* in OhioLINK today, and 45 in WorldCat.