Marital* + Martial* (for Martial* or Marital*) 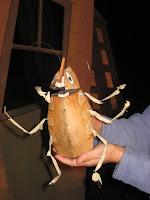 There appears to be a Mars-like media meme afoot, to judge by the 8:00 television lineup the other night, which is to say a variety of "wars" involving such improbable entities as: Codes, Storage, Crafts, Cupcakes, and Weed. (Although I'm pretty sure those last two declared a truce a long time ago.) Mars was the ancient Roman god of war; the word martial comes from Mars. I've blogged about Don Marquis before (and even George Herriman, who illustrated the first edition of Archy and Mehitabel), but it looks as if I'm doing it again today. (so sue me as archy who couldn t operate the shift key on his boss s typewriter and eschewed punctuation in general might ve put it.) Last weekend I was lucky enough to catch an excellent, and free, performance of Communications from a Cockroach: Archy and the Under Side by the Mettawee River Theater Company in Schuylerville, N.Y. This prompted me to pick up the book again, whereupon I came across a poem entitled "archy hears from mars." This poem had nothing to do with war, however, except insofar as the admiring Martians were curious to learn about Earth and its unruly inhabitants. Archy tells them that the planet is populated by "a two legged animal called man who is genuinely puzzled as to whether his grandfather was a god or a monkey / i should think said mars that what he is himself would make more difference than what his grandfather was / not to this animal i replied / he is the great alibi ike of the cosmos / when he raises hell just because he feels like raising hell he wants somebody to blame it on..." While Archy isn't too martially inclined, he isn't especially marital-minded either. His feline friend Mehitabel perhaps says it best: "...always free footed archy never tied down to a job or housework..." We found 29 instances of today's combined typo in OhioLINK, and 219 in WorldCat.