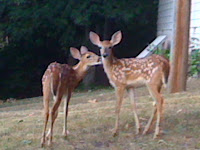 Once upon a time, Arkansas was known as “The Bear State.” Apparently we no longer have enough ursine inhabitants to warrant this moniker nowadays, but we could certainly make a case for “The Deer State.”  In our neighborhood alone they’re plentiful enough, and we refer to our unfenced flower beds as “deer salad bar.”

According to the Encyclopædia Britannica, white-tailed deer range the Americas from the Arctic Circle in Canada to south of the equator in Peru and Bolivia, and the fact that the species predates the Ice Age makes it the oldest extant deer in the world.  No wonder we’re no match for their foraging prowess.

Deeer* is a lowest probability typo on the Ballard list.  There’s only one English-language instance of it in OhioLINK, and I’m pretty sure the uniform title for James Fenimore Cooper’s classic tale is not “Deeerslayer.”

(A couple white-tailed fawns as seen on our street)