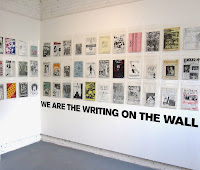 So-called fanzines (short for "fan magazines") have come a very long way since their earliest sci-fi origins. In the early 1980s, Mike Gunderloy, a music aficionado, writer, and zine collector, began to organize and provide access to the current crop of these DIY publications with a review journal and guide called Factsheet Five. Gunderloy, who also authored the book The World of Zines: A Guide to the Independent Magazine Revolution, further defines the genre as "generally created by one person, for love rather than money, and focusing on a particular subject." As his large house in nearby Rensselaer County rapidly filled to overflowing, he decided to donate his zine collection (about 500 boxes worth) to the New York State Library in Albany, where I was fortunate for a while to spend several happy hours a week creating brief catalog records for them. In the process of doing this, I would often jot down titles I found especially odd or intriguing. At one point a number of these coalesced into a sort of poem (or poems). Note: lower-case word in the first verse is mine, added there for both rhythm and rhyme.

I HATE MY JOB
I HATE YOU, myself
I'M NOT BORING YOU, AM I?
IT GOES ON THE SHELF

STRESSED OUT
SUBURBAN VOICE
STILL NO SYMPTOMS
THE NOISE

There were ten cases of Magzin* in OhioLINK this morning, and 250 in WorldCat.

Thanks for the shout-out! We've never heard of the 'zine you paired us with, Wordsworth's Socks, but we used to trade with Festering Brainsore back in the good ol' daze. Coincidentally, my brother was also working on this collection when he was getting his MLS at SUNY Albany! Small world.