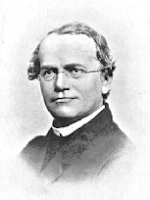 June 20th, 1822 was the birthday of Gregor Mendel, the father of modern genetics. His research with pea plants showed that inheritance of specific genetic traits followed patterns – work that wouldn’t be seen in its full significance until the 20th century, almost a hundred years later. Today, libraries are seeing a particular significance surrounding genetics as more and more people become interested in genealogy (not geneaology, which has one too many Os), tracing their family roots back centuries, to the time of Mendel and before. And spelling can matter when you’re trying to find your ancestors the McGregors, not MacGregors. In a time when critics of social media worry that we’re becoming less connected to each other, many people are reaching out across time and over continents to learn just where they inherited particular traits. My red hair is a regressive trait clearly passed down from my grandparents, but the debate continues over nature vs. nurture when it comes to less empirical characteristics: intelligence, artistry, drive, compassion, and other pieces of ourselves we see echoed throughout history as we try to find our place in the world. While we can’t say for certain that personality comes from genetics, we have Mendel to thank for sparking the idea, anyway.