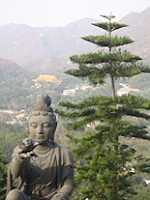 Diety (correctly spelled deity) is a rather Buddhist-like typo as its pronunciation is largely unaffected either way. In that respect, it's similar to such commonly misspelled words as Firey for fiery. (Which is strange when you think about it, given as how it's wirey, not Wiery. Wait, scratch that: it's wiry.) My young niece and nephew used to howl with laughter at a book called Crazy English, which would rhetorically ask 'if this … why not that?' concerning our language's many inconsistencies. Unlike French, ours is a matter not of what seemingly should be, but of what actually is. So, Mon Dieu, crazy or not, we simply have to learn these things by rote, not rule. (And forget the old "i before e" chestnut. It's been pretty thoroughly debunked by now, this exception being just one of dozens.) The Diety appears 41 times in OhioLINK, making it a typo of "high probability." ("Lady Deity" discovered at Wikimedia Commons.)