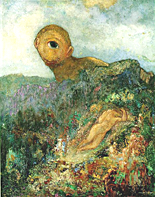 A good proofreader needs to use both eyes and keep an open mind. Or as Dr. Seuss once put it: "If you read with your eyes shut, you’re likely to find that the place where you’re going is far, far behind. So that’s why I tell you to keep your eyes wide. Keep them wide open ... at least on one side!" Although there are some seers who can operate without eyesight, most of us need to pay strict attention to the screen or the page in front of us. The otherworldly creature pictured here is using his one large eye to focus on his unwary prey, while his creator concentrated on dreamlike visions that would someday show up in a 2005 retrospective at the Museum of Modern Art entitled "Beyond The Visible." The following typos appear on the Ballard list for words relating to encyclopedia:

(The Cyclops by Odilon Redon, 1914, from Wikimedia Commons.)