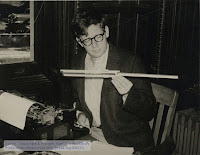 Along with the rest of the green world, Stony Brook University bid farewell to a beloved biology professor when renowned ecologist Larry Slobodkin died at his home on Long Island, New York, on September 11, 2009. Larry began graduate studies at Yale University at the age of 18, working with the esteemed G. Evelyn Hutchinson, and later took a job at Stony Brook where he founded the first department of ecology and evolutionary biology in the country, according to his obituary in the New York Times. Lawrence Basil Slobodkin was 33 years old when his father illustrated Andrew Packard's Mr. Spindles and the Spiders in 1961. In this charming children's book Louis gently ribs his scientist son with a tiny shingle reading "Prof. L. B. Slokin, Specialist" on the page where the author defines a specialist as "a man you read about in the newspapers who knows only one thing." As a polymath who brought an artistic sensibility to the world of science, Larry knew considerably more than that. Among other things, he coauthored the seminal paper known in environmental circles as "The World Is Green" and graced us with this autobiographical essay (ironically containing a variant of today's typo right in the header) published in 2009. Stoney Brook appears twice in OhioLINK and Stony + Stoney turns up ten times.