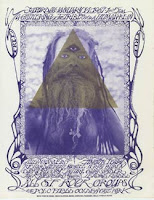 Baby, it's cold outside. But then all you needed was love on January 14, 1967, the day the "Human Be-In" was born in San Francisco's Golden Gate Park. The Be-In (a response to a recent California law banning LSD) sparked the so-called Summer of Love, a sort of "Occupy" for the 1960s, consisting mostly of draft resisters and assorted peaceniks, experimental drug users (Wikipedia says this cultural moment "introduced the word psychedelic to suburbia"), and various inchoate sexual liberationists, spiritual seekers, and other types of campus and off-campus "radicals." Sex, drugs, and rock 'n' roll. Turn on, tune in, drop out. You know, hippies. Truthfully, and wonderfully enough, it wasn't so much about politics per se, though anti-war fever raged. It was more along the lines of: "If you're going to San Francisco, be sure to wear some flowers in your hair..." (Speaking of Hair, the now-hoary musical canonizing this anatomical symbol of hippiedom debuted off Broadway the following October.) I'm psyched to report that there were only eleven cases of Psychad*(for psychedelic, etc.) in OhioLINK this morning, and 127 in WorldCat.