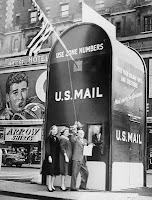 I was browsing an old Vanity Fair the other day in the bathroom (fount of so much inspired thinking) when an article about the history of 42nd Street and Times Square caused me to wonder whether Time Square (without the s) might be a profitable typo. And indeed it was. There were a dozen examples of this in OhioLINK (one false positive, i.e., just the two words adjacent to each other; and one rather ambiguous one) and 289 in WorldCat. One of these in particular caught my eye. It occurred in the 710 field and was for an establishment called "Time Square Theatre" in New York City. When I checked the authority file, this DLC record indeed spelled it that way in the 110 field. For a second, I considered the fact that this could actually be the "correct" name, i.e., wrong in its original conception, but what it actually calls itself. (Or as the White Knight once explained to Alice in Through the Looking Glass with regard to a song known as "Haddocks' Eyes": there's the song, what the song is called, the name of the song, and what the name of the song is called! Or as annotator Martin Gardner puts it: "Carroll is distinguishing here among things, the names of things, and the names of names of things.") However, since there was no cross-reference for "Times Square" on the name authority record and no 670 field justification for the spelling "Time Square," I've determined that this is clearly what's called a typo and I will be notifying OCLC of this in due time by way of their "Authority Record Change Request" form.

(Speaking of bygone times, here's a picture of a "giant mailbox stamp selling booth in Times Square" with Assistant Postmaster Aquiline F. Weierich dispensing stamps from inside the booth. From Wikimedia Commons.)