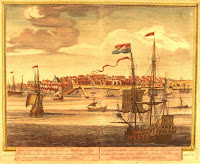 The Dutch settlement of "New Amsterdam" became a city on February 2, 1653. It was located on the southernmost tip of Manhattan Island, which was named for a land deal of sixty guilders with a band of Lenape Indians called the Manahatta. It was renamed "New York" in 1664, after the Duke of York, and after the Dutch had lost control of it to the British. Albany, then known as "Beverwyck," had become a chartered city the previous year, in 1652. I attended a lecture recently (full disclosure: this was actually on Feb. 7) at the Albany Institute of History and Art (one of the oldest museums in the country) on "What's Special About Albany?" The speaker, Tamara Thornton, explained that she wanted to talk about things that didn't just make Albany important, or even historic, but rather those that made it unique or, as she put it, "distinctive." One of them was the fact that the people of Beverwyck actively traded with the native Americans. It was important, for economic and geopolitical reasons, to have a real relationship with them, other than one that merely involved fighting and subjugation. Most of that concerned the "fur trade, and by "fur" what was generally meant were beavers. Albanians were relatively, if arguably, better friends with the Indians, or at least more civil to them, than almost any other Americans at that time. My grandparents used to live near Albany's famous "Pine Bush" during the 1920s and beyond. This story may be apocryphal, but my mother and her siblings would later recall walking through those pine barrens on their way to and from school and how they would pass by a teepee with an old man living inside. "Don't bother the Indian," their parents would sometimes say, in a nice nod to Albany's distinctive Dutch tolerance and goodwill. There were 44 cases of Manhatten* (for Manhattan*) in OhioLINK, and 1,242 in WorldCat.