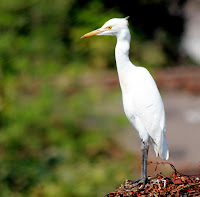 Speaking of great museums, P.T. Barnum once solved the problem of traffic flow at the American Museum in New York City (a showcase for "oddities" both natural and unnatural) by pulling a rather punnish prank. He posted a sign: "This Way to the Egress." Those who didn't realize egress was just a fancy word for "exit" and thought that maybe they were about to see another exotic species or exciting hybrid of some sort, would suddenly find themselves blinking furiously in the sunlight. The New York State Museum employs the very same word to probably more or less the same effect: a dollop of semantic chagrin with a possible frisson of fear. On the front door there's a sign that states: "In order to provide safe egress from this building, smoking is prohibited within 25 feet of all entrances and exits." (Almost exactly 25 feet away is another sign that reads, "No Smoking." More ironic still might be the fact that, reportedly, several decades ago a large block of marble fell from that building onto the sidewalk below—where people continue to both walk and smoke.) Why did the egrets cross the road? To get far enough away from the museum. There were two sightings of today's typo in OhioLINK, and 52 in WorldCat.