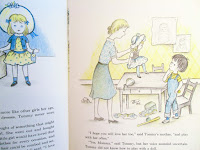 The other day, I came across an old children's book I'd randomly picked up during a recent eBay buy. It's called Tomboy's Doll. I couldn't find much out about it on the web, other than a snarky review from Kirkus and one fulminating comment ("Sexism at its finest!") on Amazon. I found it rather charming, though, for my part, and really pretty "liberating" for its day. Upon reading it through a second time, I saw that the copy I held in my hands had once belonged to the "Grouse Creek School" and—yes, I thought, free associating, what a bunch of grousing, PC pedants some readers can be! First of all, I think one should always keep in mind when a book was written and by whom. Never be blinkered by an ahistorical agenda. And secondly, try and remember that books like these are the stories of individuals, not object lessons for the masses, though they often do contain a bit of a "moral." Charlotte Steiner was born in Vienna in 1900 and emigrated to the United States in 1938 while fleeing the Nazis with her family. She was a 69-year-old woman when Tomboy's Doll was published. This was three years before Charlotte Zolotow wrote the much-praised feminist favorite William's Doll, in which a young boy is eventually allowed to play with a doll (because, his parents reason, it may help him become a better father when he grows up). In Steiner's book, the protagonist is a little girl named Mary Louise, but everyone (including her mother) calls her "Tommy"—obviously her preferred name and an apparent variant on the word tomboy. (The working title had been Tommy Tomboy's Doll, which seems to underscore even more clearly the importance of self-identification.) The Amazon reviewer complains that Tommy's "mother forces her to play with a doll" and "in the end, everyone is happy because she was forced into a gender normative role." But that's really putting it too strongly, I think. Tommy's mother does give her a doll, but Tommy is "confused" because she doesn't "know how" to play with it (suggesting it's the first one she's ever had). She and her best friend Billy experiment by using it as a shuttlecock in badminton; tying it to the cherry tree to scare crows away; giving it a ride on the back of the farmer's dog Max; teaching it to "swim" in Billy's wading pond; and making it the "victim" in a game of cops and robbers. Tommy's mom (who presumably is also the person who bobbed her daughter's hair and bought her all the "boy" toys and teeshirts and blue jeans and so forth that you see her in on every page) does little more than mildly point out, "That's not how you play with a doll" and clean the thing up a bit. Eventually, Tommy manages to bond with "Amanda" after the two of them get lost in the woods (which she probably does by modeling her mother's own equanimity and empathy toward her) and starts "playing" with the doll more properly. Nowhere is it implied, however, that she's about to give up any of the other toys or games or personal style she's come to favor. Perhaps nowadays, we'd have to have the parents calling Tommy "he" or even treating her like a "gender non-conforming" doll herself, swapping out old parts for new ones that presumably fit better. Like the disgruntled Amazon reviewer, I'm being a little sarcastic there, but back in 1969 (the year of the Stonewall riots, and three years before the debut of Ms. magazine), this book surely would have been in the feminist forefront, celebrating the idea that a girl can be just like Tommy (the dedication reads, "To Nora, my tomboy friend") and just as unconditionally loved. It would also seem to be saying that "tomboys" (and perhaps even regular boys) can learn how to love and nurture other sentient beings (or their stand-ins) while still climbing trees, playing with trucks, and throwing balls. We used to call that being "well-rounded." (Tommy appears to be a pretty good artist too. Is that a drawing of Amelia Earhart hanging on her wall??) There were 29 cases of Stien* + Stein* (for Stein* or Stien*) in OhioLINK today, and 250 in WorldCat.