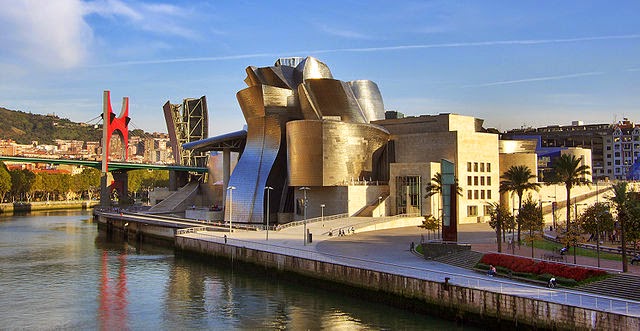 Architecture has two Ts and Cs, so it’s easy to forgive those who add an extra H as well.  It’s a word and a profession that doesn’t quite fit the way we expect – is it an art?  Is it a craft?  Somewhere in between?


I was an outsider from the beginning, so for better or worse I thrived on it. I was different from the architects, who called me an artist, which was their way of marginalizing me. And then the artists got competitive and said, No, you’re still an architect, because you’re putting toilets in your buildings, in your art. Richard Serra dismissed me as a plumber.

Even so, his fellow architects (not architechts) voted Gehry’s Guggenheim Museum in Bilbao the greatest building of the past 30 years.  Sometimes, not fitting in can be a good thing.

(Image of Guggenheim Museum in Bilbao courtesy of Phillip Maiwald, from Wikimedia Commons)
Posted by librarytypos at 7:00 AM

And if you find yourself surrounded by impossible angles redolent of non-Euclidean geometry, you'll know you've entered a city designed by Architecthulhu.