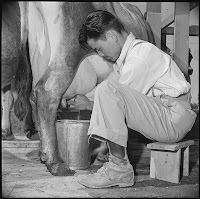 A friend and her husband were riding their bikes in the country the other day. After passing three different dairies and their associated olfactory components, the husband could no longer suppress a pungent pun and wryly exclaimed: "Mmm, smell that dairy air!" (Ironically, one of my own favorite hangouts as a country girl was called Three Farms Dairy: they had excellent root beer floats, and we would sometimes ride our bikes there to get one.) Air itself, of course, is a substance—and therefore has substance—but taken alone is basically intangible. Still we often think of it as something that can be smelled, heard, felt, or even seen. I once knew an adorable little girl (all grown up now!) who one time, after watching a few minutes of an old classic film with me on TCM, wondered aloud: "Was the air black and white back then?"* I knew just what she meant by that and almost hated to disabuse her of the appealing notion that life in the olden days was exactly like it was in the movies, right down to its striking black and white cinematography. Today's typo doesn't put on airs, having been found only three times in OhioLINK and 25 times in WorldCat. Though, actually, that's kind of a lot for a fancy French word meaning "a euphemistic term for a person's buttocks." Dare to air this dirty laundry in your own library's catalog, instead of just sitting there on your derrière.

*Within a few hours of writing this entry, I found myself watching the Merrimack College commencement address by Charlie Day, alumnus and star of the popular sitcom It's Always Sunny in Philadelphia. At one point, Day mentioned his clueless former roommate who had once remarked that "he wished he lived when it was black and white." When I promptly shared this coincidence with a friend, he responded by sending me a link to Elvis Costello performing the song "Black and White World" back in 1980. There must have been something in the air that night!

Your link to the Costello song mistakenly points to Day's commencement address instead. By the way, you could also have mentioned the brilliant Calvin & Hobbes cartoon about black & white photography - see http://www.reoiv.com/images/random/dadbandwandcolour.jpg.

I'm reminded of a family friend whose family owned a major dairy farm and milk company outside Philadelphia. He used to refer to himself as the, "dairy heir."

Thanks for fixing the link - and for all the interesting tidbits of information I pick up from this blog.