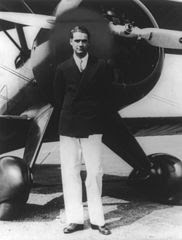 If someone convinced you that biography is spelled with more than one B, I’m afraid you’ve been the victim of a malicious typographical hoax.

Today is the anniversary of Howard Hughes’ record-breaking transcontinental flight from Los Angeles, California to Newark, New Jersey in 7 hours, 28 minutes and 25 seconds in 1937.  This was not a hoax, but got me thinking of one: Clifford Irving’s faked biography of the billionaire recluse.

This wasn’t a simple mistake, where Irving misattributed a few quotations to Hughes. He set out from the start to fake the book, and spend a year in prison as the result. I recently stumbled across a fascinating interview with Irving at Bloomberg.com.

In it, Irving claims that money wasn’t his motivation, and that he had no idea that what he was doing was criminal. I have an odd love of hoaxes and can understand the appeal of doing something crazy just to see if you can get away with it. Irving describes how he faked conversations with Hughes:


We didn't make them up. We actually had the conversations. My friend Dick Suskind and I set a Sony tape recorder on the table and we'd switch playing the roles of Howard Hughes and Clifford Irving. We got into it as actors.

I’ve done similar mental and artistic workouts with fellow theatre geeks, and it’s quite fun. I suppose the difference is that we didn’t get paid a $750,000 advance or receive jail time for our goofing around.

Biobraph* is a low probability typo, with 71 hits in Worldcat.

(Photo of Howard Hughes courtesy of Wikimedia Commons.)
Posted by librarytypos at 8:00 AM