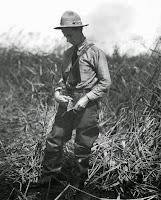 Speaking of boiled eggs, biology, and typos, we just heard a funny story from a reader (thanks, Misha!) concerning the Washington Biological Survey. This tale, which unfortunately would appear to be apocryphal, involves a camper from Arkansas (or a farmer from Alberta, etc.), who after shooting a banded bird with a tag reading "Wash. Boil. Surv.," dashed off an irate note to the Survey complaining about its product. In one version, the note went like this: "Gents: I shot one of your crows last week and followed instructions attached to it. I washed it, biled it, and surved it. It was awful. You should stop trying to fool the public with things like this." Although the story is apparently a not-so-urban legend of rather long standing, the typo itself was real. According to Smithsonian magazine, it may have gotten its start during the 1920s when the government made use of a batch of bands on which the abbreviation "Biol." was misspelled "Boil." A couple of decades later, this amusing typo had evolved into a popular yarn, which, as Snopes puts it, "played on the stereotype of the backwards, rural farmer as too unsophisticated to recognize the significance of a banded bird, too unschooled to interpret the designation on its band as anything but cooking instructions, and too poor to let something he'd killed go to waste by not eating it." It's pretty silly, I agree, but considering that birds are often boiled and eaten, I prefer to think the joke was on the gummint agency that couldn't even spell its own name right. There were 14 cases of Servey* (for survey*) in OhioLINK today, and 473 in WorldCat.
(Frederick Charles Lincoln, in the field, applying a leg band to a duck. Lincoln was an accomplished biologist, administrator, and writer. From the U.S. Bureau of Biological Survey and the U.S. Bird Banding Laboratory. Courtesy of Wikimedia Commons.)