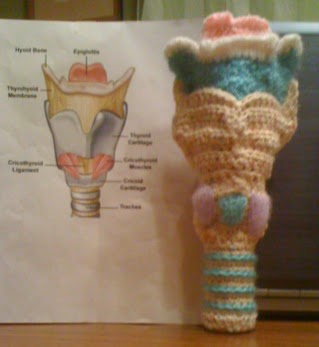 My sister is pursuing a master’s degree in voice performance, and she was assigned a most entertaining project for her vocal pedagogy class this semester: fashion a larynx out of whatever material(s) she wanted. For those of you not familiar with the larynx’s appearance (as I was not), it doesn’t lend itself to rendering in just any medium. Legos, for instance, would be a non-starter for anyone but a Lego engineer.

So I suggested crocheting one. If the larynx itself is a rather bizarre-looking organ, I reasoned, why not multiply that effect with yarn? And as Lucia began to take form (yes, she acquired a name), she certainly lived up to our expectations. We finally decided she resembled some strange mix of Georgia O’Keeffe’s work. But you be the judge. (Surely it won’t influence your opinion to know that Lucia was voted best larynx in the class.)

As if this story weren’t silly enough—Google “crocheted larynx,” and you will find there are others out there! Fortunately not as many as today’s typo Vocl*, which was found 28 times in the OhioLINK database and 535 in WorldCat. Many are not actually errors, and sound recordings look to be your most fertile ground for clean-up.