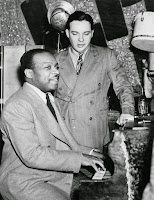 If you're trying to write a poem (and if you haven't ever tried that, you should!) and you should happen to get stuck, you can always check out RhymeZone for suggestions. And to get into a sing-song mood first, you might even want to give a listen to an old Bob Crosby and the Bob-Cats number called "Way Back Home." (Bob Crosby was Bing's baby brother and fused traditional Dixieland jazz and emerging "Big Band" swing music.) The song consists of six main verses, each one containing up to six rhyming lines, and it starts out like this: "The roads are the dustiest / The winds are the gustiest / The gates are the rustiest / The pies are the crustiest / The songs, the lustiest / The friends, the trustiest / Way ba-ack home..." Each one of these line-ending words ends in —iest, and since we've already done the most common typo for the word rhyme, we're going to go with optimum instead, one of many synonyms or near-synonyms for the word superlative, according to Thesaurus.com. There were three occurrences of Optimun* in OhioLINK today, and 263 in WorldCat.
(Count Basie and Bob Crosby, Howard Theatre, Washington DC, 1941, from Wikimedia Commons.)