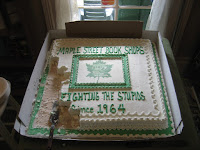 A friend attended a family reunion recently where a couple had just celebrated their 20th anniversary. A large sheet cake had been ordered, but when it was served, a few of the guests were confused by its message. "Happy 20th Ann, Dan, and Deb," it read. "Who's Ann?" one of them asked worriedly. (It turns out that the man's former wife had been named Margaret Ann; the only thing that might have made it funnier is if her name had been Ann-Margret.) Clearly, however, this "Ann" was intended to be an abbreviation for Anniversary, which is really rather odd on a cake, I would think ("Happy Birt, Bert"??), but perhaps a little more kosher when followed by a period and not a comma. And what is up with that second comma there, separating the long-married husband and wife? It's almost like the baker were doing it all on purpose, somehow, insidiously trying to promulgate polygamy through pastry! There was one case of Annver* (for anniver*) in OhioLINK today, and 92 in WorldCat.