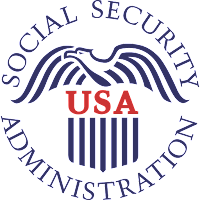 It’s retirement season at my library. We will be losing two excellent colleagues at the end of June (the close of our fiscal year and therefore a popular time), and several more in the next few months. Oddly enough, none of them seem to be expressing regret over leaving us. In fact, some have been observed conspicuously counting down the days.

However, did you know that retirement is actually a fairly new concept? It wasn’t until the late nineteenth century that pensions became common, and the United States didn’t create Social Security until 1935. Here’s hoping that pensions are not as scarce as hen’s teeth in the coming years, but we can at least take comfort in the fact that penions is a low-probability typo. There are 2 instances in the OhioLINK database, and only 26 in WorldCat.

(Official seal of the Social Security Administration, from Wikimedia Commons)