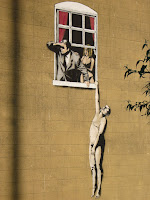 Je suis Ashley. That's the universal message we should all be taking away from this devastating hack of the now-infamous website for the discreet adulterer. Although it's no longer even remotely discreet. The "down low" has become something one can easily download. And that coy finger to the lips that greets the "curious" cad is starting to look increasingly ironic. No one is quite sure who unleashed this recent dump of personally identifiable info, though. Was it an "inside job" by a disaffected female (as sketchy computer-security expert and gender-gleaning guru John McAfee alleges) or a sort of terrorist attack by an outside group of so-called "ethical" hackers? It's crucial to try and figure this out and to find ways of preventing it from happening again. But we also need to look at the reasons why, as a society, we seem so willing to dispense with pesky things like privacy and personal liberty whenever we find ourselves objecting to another person's values, choices, and free speech. (This is especially true when their own hypocrisy is glaring.) It's like learning of a tragic accident, serious illness, or criminal act that maybe could have been avoided: we assure ourselves that such a thing could "never happen" to us because we are not that stupid, careless, unhealthy, or morally lacking. But pride goeth before a fall. The infringement of the rights of others almost always comes at a cost to ourselves. And those who sit in front of glass monitors (as well as those who don't—perhaps because they can't afford them) really shouldn't be throwing stones. Seventeen cases of this illicitly coupled typo were discovered in OhioLINK today, along with 232 of them in WorldCat.
(Close-up shot of graffiti by Banksy near Park St. in Bristol, United Kingdom, from Wikimedia Commons.)