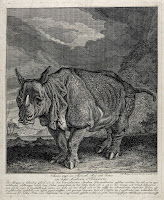 In the wake of recent news reports about the tragic killing of "Cecil the Lion" (though purely by chance), I just finished reading a fascinating book about "Clara the Rhinoceros." Clara was an Indian rhino who enjoyed incredible fame and influence in 18th-century Europe, where the near-mythical beast had not been seen in over five hundred years. While the orphaned offspring of slaughtered animals are often collateral damage, and generally doomed if not adopted, some poor babies are luckier than others. Clara was left a defenseless infant in 1738 when her mother was dispatched by Indian big-game hunters; she was then rescued by the director of the Dutch East India Company, who gave the docile and appealing calf free range of his estate. Clara "imprinted" on human beings very early on and remained approachable and relatively imperturbable for the rest of her days. (Although apparently she got a little cranky during that time of the month.) Two years later, she was bought by sea caption Douwe Mout Van der Meer of Leiden; it was a highly fortuitous pairing and the rest, as they say, is history. Suffice it to say, though, that "Miss Clara" met more royalty and heads of state, artists and scientists, curious clerics, and eager entrepreneurs, along with countless members of the general public, over the course of seventeen years, than one could reasonably shake a stick—or four-foot "unicorn" horn—at. There are actually two books out about Clara right now. The one I read is called Clara's Grand Tour, by Glynis Ridley, published in 2005. The other is a children's book titled My Travels with Clara, by Mary Holmes and Jon Cannell (2007), produced by the Getty Museum in honor of the life-sized portrait of Clara featured in its exhibit Oudry’s Painted Menagerie. Today's typo turned up three times in OhioLINK, and 68 times in WorldCat.
(The Rhinoceros "Miss Clara," etching by Johann Elias Ridinger, shown with a lake and palm trees in the background, 1748, courtesy of Wikimedia Commons.)