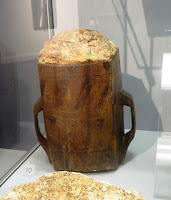 On a recent trip to California, I saw an exhibit at the Bowers Museum called "Mummies of the World." In other words, not just the highly processed Egyptian mummies we're used to seeing or hearing about, but rather a whole array of them from various parts of the globe and various periods in time. Some of them were intentionally preserved and some accidentally. On a seemingly unrelated note, I was discussing with a couple of friends whether or not you can safely leave your butter sitting out, along with the relative merits of what's known as a "French butter dish" or "butter bell," etc., when suddenly the two topics were weirdly brought together with the news that a 22-pound "chunk of butter"—estimated to be more than two thousand years old—had been found in a peat bog in Ireland. "Didn't I tell you that it's OK to leave butter out?" says one. "Here's the proof." "I guess bogs are like refrigerators," says the other. "Better," I replied, "Better bog butter..." And then this little ditty began to form in my head:

Betty Peat began to putter,
All around some old bog butter,
It was big and in a bag, and really rather hard to lug,
But even after such a lag, was unmolested by a bug.

Enjoy your naturally softened butter and stay away from hydrogenated fats (which could probably give that bog butter a run for its money, longevity-wise). There were three (and two) cases of today's typos in OhioLINK, and 41 (20) in WorldCat.