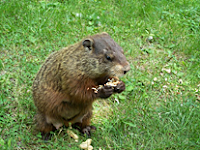 How much Woood* would you say we should chuck in all our catalogs? Perhaps you should chew on that one awhile yourselves, but eager beavers across the land could surely dam up any access problems concerning this typo in no time flat. I should probably point out, however, that woodchucks, also known as groundhogs (being solitary, subterranean squirrels of a sort) have little in common with beavers besides the word wood. OhioLINK turned up four cases of Woood* and one each of Woudl, Wwould*, Coud, Woudn't, and Shoudn't, along with four instances of Shoudl. (Take care when it comes to the elision of the l, though, particularly in works from the 17th century—most strikingly the play by Sir George Etherege, She Wou'd if She Cou'd.) These are typos of low or lowest probability, but they would, could, and should be corrected wherever they happen to occur. (Woodchuck shucking a nut from Wikimedia Commons.) P.S. Happy Birthday, Woody!