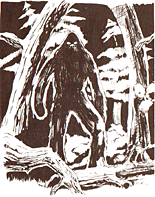 Not to be cryptic, but there's zoology and there's zoology. Or, rather, there's cryptozoology. Defined as "the search for animals believed to exist, but for which conclusive evidence is missing," it covers the likes of the Loch Ness Monster and Lake Champlain's Champ; a pantherish creature resembling the animus of Simone Simon in Cat People; the Mothman of West Virginia; and perhaps most compellingly of all—Sasquatch, Yeti, or, as it's known around these parts, Bigfoot. (During a game of Scrabble, Bart Simpson coined yet another term for the Homeroid hominid: Kwyjibo.) According to a 1992 book coauthored by a coworker, there have been approximately 140 reported Bigfoot sightings in Vermont and New York State alone. I sighted 11 typos in OhioLINK for the words zoology et al., including Zoolig*, Zolog*, and Zoolg*. On the Ballard list, these typos would be considered "low probability." But still.... (Illustration from Monsters of the Northwoods, by Paul and Robert Bartholomew, William Brann, and Bruce Hallenbeck.)