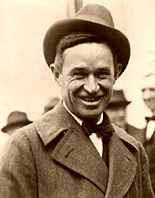 Some libraries are like Will Rogers was with men: They've never met a document they didn't like. These are called "full depository" libraries. "Federal depository" libraries, of which there are 1,250 throughout the country, collect documents published by the Government Printing Office and have done so since 1813. Despite the fact that Will was a well of wit and once quipped, "Be thankful we're not getting all the government we're paying for," depository libraries are glad to get the work. There are 23 examples of Documet* in OhioLINK, depositing it in the "high probability" section of the Ballard list, which also contains the following related typos:

In a parting shot from Rogers, remember: "Nothing you can't spell will ever work." (Photo from the ultimate depository collection, the Library of Congress in Washington, D.C.)