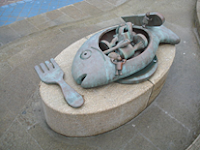 Eighteen cases of Scuptur*, two of Scluptur*, and one of Scuptor* were found in the OhioLINK database the other day. A scup (or porgy) is a fish found in the Atlantic Ocean between South Carolina and Massachusetts. Piscean sculptor and architect Frank Gehry (whose performing arts center at Bard College I found myself in last weekend) reportedly has a fondness for fish motifs. And, incidentally, while most dictionaries consider sculpt to be a valid back-formation or alteration of the word sculpture, some old-timers don't, preferring we use sculpture for both noun and verb, or even just as noun alone. Sculp, however, is widely viewed as incorrect, although Noah Webster's 1828 American Dictionary of the English Language ("regarded by many as the finest English dictionary ever published") defines it without reservation as "to carve; to engrave." (The 1993 Columbia Guide to Standard American English calls sculp "standard" but "rare.") Not to sound too wishy-washy or to pick a fight here, but I'm not really sure what I think about all that, and I'm also not sure whether anyone has ever sculpted a scup. (I did, however, find this wonderful photo by Gerardus of "Fish with Soldier" by Tom Otterness, located in The Hague, Netherlands, at Wikimedia Commons.)