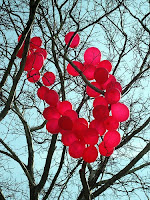 Physicist Auguste Piccard was born on this day in Switzerland, January 28, 1884. He explored the upper stratosphere of the Earth in balloons of his own design, with airtight, pressurized cabins. In 1932, he ascended as high as 17,008 metres (55,800 feet)! Later, he used a similar cabin design to explore the depths of the oceans.

Baloon* is a common typing error for balloon*, occurring over 25 times in OhioLINK (making it of high probability on the Ballard list) and over 200 times in Worldcat, not including the instances of the name Balooni.

Be careful with another possible typo, ballon, because this is also the German word for balloon—think of Nena’s anti-war hit pop song, 99 Luftballons (recorded in English as 99 Red Balloons, though "Luft" simply translates as "air", not "red").

(Red balloons photo from Meguapixel's Flickr photostream)
Posted by librarytypos at 5:00 AM

"Ballon" is also the French word for the English "balloon." The classic film "Le ballon rouge" by Albert Lamorisse really is about a red balloon, and is worth watching over and over.