Typo of the Day for Librarians
Institi*, Institiu* (for Institution, Institute etc.)

This is the type of typo that is easy to make, as evidenced by the large number found in OhioLink (200+ to 407, depending on whether the language limit functions properly). This is found in the highest probability category in the Typographical Errors in Library Databases.

You will find this represented by Instition, Institition, and Institiution, among others, either by duplicating the "ti" (probably having that finger strike the "i" instead of the "u"), forgetting the "tu", or by striking both the "i" and the "u" just for good measure.

Given the proximity of the I and U on the standard QWERTY keyboard (there are other keyboards, which separate the I and U), it is understandable how and why this typo appears with such frequency. Interestingly, the layout of the keys was constructed the way we find it today so that the arms controlling the type would not jam. Fine and good for typewriters, not all that necessary for pc keyboards, which are nigh ubiquitous, being found in institutions around the globe.

Be careful of non-English manifestations of "institute". While most every typo you locate will need correction, there are some that are correct in their own right. 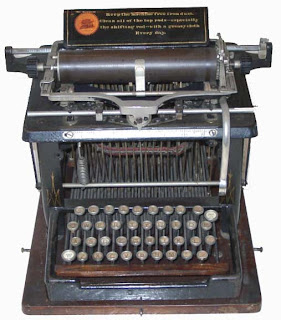 Extracted, for AUTOCAT, from Typo of the Day for Librarians at
http://librarytypos.blogspot.com/. If you have comments about the words selected, how they are selected, or the way the items are written, please contact Terry Ballard .

Cary Daniel
Posted by librarytypos at 5:00 AM