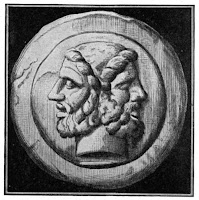 The month of January was named after the Roman god Janus, god of beginnings and endings. His name comes from the Latin word for door, ianua, and he is often depicted with two faces (as seen on the coin pictured), carrying a key.

Janaury occurs 18 times in OhioLINK, making it a typo of high probability on the Ballard list.

Leanne Olson
(Janus coin picture from about.com)
Posted by librarytypos at 5:00 AM