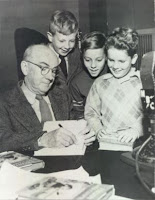 Architect Wilbur Post (played by actor Alan Young) never had to ask: "Hey, Ed, where you at?" (The horse, it seems, was always in his stall.) But if he had had to, TV's "Mr. Ed" could answer him—lugubriously and selectively (he only ever talked to Wilbur) and in the velvety voice of Allan Lane, whose own name (for some reason) never appeared in the credits. The Wikipedia article on this hit sitcom, which ran from 1961 to 1966, was quite educational. I was surprised to learn, for instance, that the eponymous equine was created by the esteemed Walter R. Brooks of Freddy the Pig fame. (Of course, of course!) Brooks, who hailed from Rome, New York, and attended the University of Rochester around the turn of the century, wrote for The New Yorker and other popular magazines of the day. He published 180 short stories all together, 25 of which had to do with Ed the talking horse. The television program was reportedly based on a Prohibition tale entitled "Ed Takes the Pledge." Unlike the voice actor Allan Lane, Walter Brooks received credit on every episode for "the famous Mr. Ed." The high-probability typo Eduat* (for Educat*) turns up 58 times in OhioLINK today. Take a pledge to catch it in your own catalog, if that's where it's at.