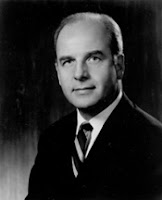 Today is the 40th anniversary of Earth Day. It's been celebrated on April 22 ever since its inception in 1970 by Wisconsin senator Gaylord Nelson. Actually, the name of the day (which Nelson had dubbed the "National Environment Teach-In") occurred to several people, including Leonard Koenig, an ad copywriter who later won acclaim with his "Think Small" Volkswagon [i.e. Volkswagen] commercial. (The designated date also happened to be Koenig's birthday, which inspired the rhyming phrase Earth Day.) Gaylord Nelson was a proponent of population control, though he was also responsible for securing warning labels about the side effects of oral contraceptives (see the "Nelson Pill Hearings"). He once summed up his priorities by saying: "The economy is a wholly owned subsidiary of the environment, not the other way around." If you think of the earth as a big blue ball bouncing through space, today's typo is like a cheerleader hopefully urging it on: Go, ball! The typo Gobal* turns up 26 times in OhioLINK, and Golbal* six times. (About half are correctly spelled foreign words and personal names.) Now warm up your workspace and make these typos global.

That should be Volkswagen, of course.