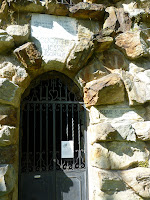 I have been dissed, kissed, missed, pissed, and possibly even hissed—but I don't think I've ever been issed. Jesus Christ was reportedly the issue of God (aka "the Father") and on Easter Day he supposedly rose from the dead and issued from a cave. Therapists, of course, have issues, as do certain lawyers, it would seem. Librarians have them too. One of these would be those pesky little access-blockers that are our raison d'etre here at TotDfL: typographical errors in library catalogs. Typos are problematical no matter where they turn up, though, or whosoever finds them. Today's typo was found zero times in OhioLINK, but over 400 times in WorldCat.

(I could have posted a picture here of the International Space Station, but speaking of heavenly bodies, I found this one more appealing. It's apparently some sort of Jesus grotto in Issime, Italy.)

I'm not Christian, but I object to this post because it is wrong to casually ridicule people's religious beliefs, and especially gauche on the holiest weekend of their religious year, and especially inappropriate in a professional forum for librarians, who have to show respect for all of their patrons, whether we agree with them or not.

I am a Christian, but regardless of my beliefs I offer kudos to Patt for pointing out what one would think should be obvious to a professional librarian.