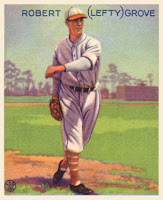 Today is the birthday of the great Ring Lardner, but alas, it looks like I've already blogged fondly about him here. Lardner was a "sports writer" of considerable fame during the 1920s, but he was a wonderful, if underrated, fiction writer and "humorist" to boot. Perhaps his most famous baseball story is You Know Me Al. It seems that March 6 is a popular birthdate for baseball players, according to Wikipedia. The following players were all born on this day, along with Ring Lardner himself, who was clearly one of their biggest fans: Lefty Grove (1900), Ted Abernathy (1933), Cookie Rojas (1939), Willie Stargell (1940), Marcus Thames (1977), Clint Barmes (1979), Érik Bédard (1979), Jake Arrieta (1986), and Francisco Cervelli (1986). The following died on this date as well: Frank Barrett (1998), Danny Gardella (2005), and Kirby Puckett (2006). It strikes me as interesting that these fellows were all either pitched into, or departed from, this mortal mound midway between spring training and the official start of baseball season. I probably shouldn't run with that thought too far, though; I suppose there are baseball players, like suckers, being born every minute. And I know I'm throwing you a bit of a curve ball with all of today's numerous typos, each of which only comes up once in OhioLINK, and between four and 116 times apiece in WorldCat. Still, you may catch a bit of luck with these in your own catalogs. They're worth taking a swing at.