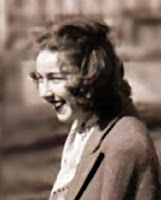 Flannery O'Connor was born on March 25, 1925. She is one of several women writers of the so-called Southern Gothic school and, along with Carson McCullers (with whom I happen to share a birthday), lived in the state of Georgia for most of her life. (O'Conner was actually born in Savannah, where I myself went to live for a year after college.) Flannery O'Connor once wrote that "anything that comes out of the South is going to be called grotesque by the northern reader, unless it is grotesque, in which case it is going to be called realistic." O'Connor is known for both her grotesque realism and her unique religiosity. She was a passionate and practicing Catholic who considered her Creator to be not only her co-pilot, but her co-author as well. In the recently published (full disclosure and to avoid any confusion: I'm writing this in November, and predating it) A Prayer Journal, she claims: "If I ever do get to be a fine writer, it will not be because I am a fine writer but because God has given me credit for a few of the things he kindly wrote for me." They seem to have made a great team. O'Connor was the first fiction writer born in the twentieth century whose works were collected and published by the Library of America; and The Complete Stories of Flannery O'Connor won the National Book Award for fiction in 1972. I haven't read her novels (Wise Blood and The Violent Bear It Away), but I did just read a short story she wrote called "Revelation." It was published just after her death and deals with both God and race relations in the Deep South during the fractured 1960s. Mary Flannery O'Connor finally met her Maker on August 3, 1964, after a long battle with lupus; she was only 39 years old. In spite of her ongoing efforts toward patience and humility, however, I'm sure she was much like all writers, and would greatly appreciate us getting her name right. O'Conner* + O'Connor* turns up 70 times in OhioLINK, and 453 times in WorldCat.
(Portrait of Flannery O'Connor, 1947, from Wikimedia Commons.)

Welcome back! I've missed having your spelling errors to check.

You might consider changing the date on the blog to reflect the posted date, so people know its current.