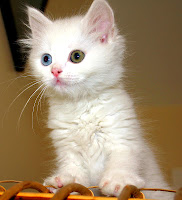 Lately I've been watching TV with the closed captioning turned on. With certain things, like scripted programs or classic films on TCM, it's really quite accurate and useful for following along. But I think the real reason I'm drawn to it is its accidentally absurd, almost surrealistic quality. I could fill notebooks with endless examples of this and will often jot them down for my own befuddled amusement. Last night I was catching a few minutes of Conan O'Brien and during a bit about the resignation of the pope, sidekick Andy Richter observed: "We have a real crowd of Vatican watchers here..." The closed captioning wonderfully rendered this as "cat van watchers" and suddenly that was all I could think about. Like an overstuffed clown car—a rockin' tricked-out van full of kitties! Who cares about the future of the Catholic Church when there are giant cat carriers cruising our highways! Of course, it's just another case of apparent voice recognition software gone ludicrously haywire. But happily it brought me to today's adorable cat picture, featuring this tiny too-cute Turkish Van cat. According to Wikipedia, these fascinating felines are larger than usual, pretty much all-white, and "frequently odd-eyed." The Armenians are said to have "revered" the Vana katou. And unlike anything your average cat might do, Van cats are "known for swimming in Lake Van." This little guy almost looks like he's driving too. Maybe he blinks one sleepy eye (blue) for STOP and the other one (green) for GO. In any case, he couldn't be any more precious were he wearing the cat's pajamas. There were no hits on Vatcan* (for Vatican*) in OhioLINK today, but we did find 17 in WorldCat.