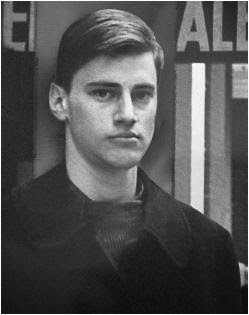 In the 2013 documentary Shepard & Dark, we learn that playwright Sam Shepard often revisits the darker side of father-son relationships in his work. Plays can be confessional and were I to be writing one myself right now, it would probably have to be about spelling. I have something to get off my chest. The night before watching this movie on Netflix, I took part in another local spelling bee. I knew virtually every word that was asked, too—every word, that is, except for the relatively simple one I so stupidly got wrong. Mind you, this was a word I have used in half a dozen blog entries (I checked!) and even blogged about itself back in 2006 (though the entry is no longer accessible in the archives). It was also blogged about again in 2009 by Leanne Olson. How was it possible, then, that instead of giving the correct answer (the first one, in fact, that had come to mind), I miserably and abruptly blurted out, "P-L-A-Y-W-R-I-T-E" for playwright? I mean, okay, granted, we've got playwriting, along with copyright and copywriter, to mix things up a bit. But still. It seems that this phoneme-non, if you will, is either a psychological disorder (akin to plunging self-esteem or paralyzing fear of success) or it's just a big old cosmic joke. And that, anyway, I'm not the only if, and, or butt of it. There was the Indian boy who flubbed Darjeeling; the girl from a German-speaking family who spelt Weltschmerz with a V; the Canadian fille who whiffed confiserie; the Asian kid who got disoriented by Oriental; Brick Heck, who "overthought" reindeer; Charlie Brown, who choked on a beagle; and all the permanently chagrined spelling bee contestants who ever misspelled the word misspell. The point, apparently, is for you to blow it in the most ironic or humiliating way possible. (The other night at the library, we all sat staring at a giant fake Scrabble board, trying to locate the single misspelled word. For the first time during this portion of the bee, nobody seemed to see it, although it was right in the middle of the board. That word? LIBARY.) Sam Shepard keeps on playwriting until he gets it right, and I guess I'll have to keep on spelling till I quit missing the easy layups. Or as a friend of mine so aptly put it: "snatching defeat from the jaws of victory." Since we've blogged about Shepard before, we'll be going with Sameul* today instead. We got 35 hits in OhioLINK, and 416 in WorldCat.
(Sam Shepard at age 21, from Wikimedia Commons.)