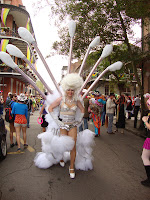 The cottony sticks that we currently call Q-tips were originally known as "Baby Gays." (I kid you not.) In 1923, "upon observing his wife applying wads of cotton to toothpicks, Leo Gerstenzang conceived the idea of manufacturing a ready-to-use cotton swab." He went on to found the Leo Gerstenzang Infant Novelty Co., a firm that marketed baby care products. Three years later, the name was changed to Q-tips, the "Q" standing for "quality." (We're assuming the "Gays" part was an attempt to suggest that your little ones would be very happy indeed to have their ears and other parts cleaned out in this manner. And that were a name like that to be floated today, some group like "Mothers Against Turning Our Children Gay" would probably throw a major tantrum.) Though "Baby Gays" sounds a wee bit ungrammatical, not to mention hopelessly dated these days, it's very likely akin to to the word nosegay, meaning a bunch of flowers that pleases the nose. We dug 53 of these out of OhioLINK today, and 444 out of WorldCat.
(Miss Q-Tip Mardi Gras, New Orleans street costumer in the French Quarter, 8 March 2011, from Wikimedia Commons.)