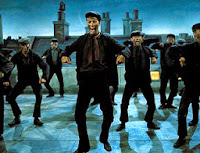 It's funny the way practically anything can be made to sound dirty with little more than a wink and wipe. (Years ago, I recall some feminist wag sarcastically saying that "a phallic symbol is anything longer than it is wide.") The other night I was at a big-box store buying more Christmas tree lights when I noticed a handwritten sign on a whiteboard near the entrance: "Do you need some help around the house?" it read. "Free estimates for roofing, siding, [etc.]." Someone had erased the first four letters of the word estimates, however, leaving it to offer "Free mates" instead. Even the words roofing and siding were beginning to look a bit salacious and possibly even criminal ("roofing" unfortunately evoking the notion of sex under the influence of roofies). "Mates" do not have to be sexual, though, as any good Anglophile will tell you. They can be found both here and abroad, on rooftops or not, dirty or clean. While the British nanny Mary Poppins helped out around the house, her mate (Bert the chimney sweep, played in the Disney flick by Dick Van Dyke) did his part up above. There were four cases of today's typo in OhioLINK, and 184 in WorldCat.
(Screenshot from the trailer for the film Mary Poppins, 1963, from Wikimedia Commons.)