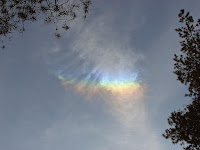 Partly due to the cool terminology and partly because they're just so amazing, there was a time when I dreamily considered working with clouds for a living and being a "weather girl" when I grew up. (I'm not sure whether I knew this or not, but apparently the first famous weather girl was also called "Carol Reed"!) Those mysterious Latin words, which almost resembled clouds themselves floating in chalk dust across the blackboard, sounded like names from an old mythology book (Romulus and Remus, Cumulus and Nimbus), and the clouds themselves were constantly shape-shifting and assuming the appearance of various Aesop-type animals. While these days, I never seem to know what's going on with the weather and will often get caught in it unprepared, I imagined back then that it would be nice to be able to tell folks what to expect outside when they got up in the morning. Whether it's rain or shine in your own neck of the woods right now, take a peek inside your catalog for our low-probability typo of the day, which turns up three times in OhioLINK, and 42 times in WorldCat.
(Halo in cirrocumulus near the city of Łódź, Poland, from Wikimedia Commons.)